Longreach is a town created on the back-breaking labor of intrepid stockmen and a brilliant team of aviation entrepreneurs whose goal to send Australia to the world on wings became one of our country's most inspiring success stories. 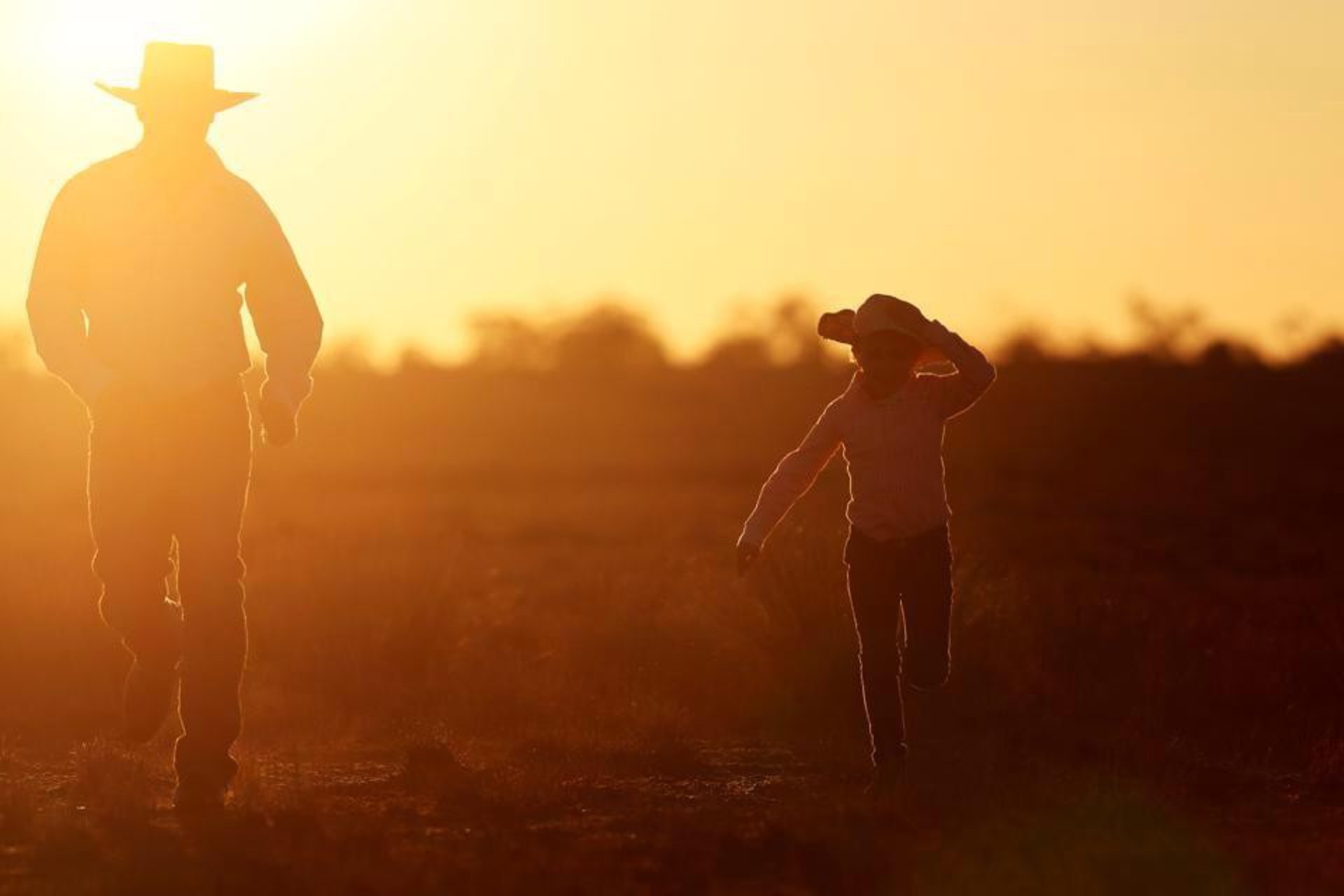 It's the perfect place to take the family to learn all about the legacy of the town that birthed QANTAS, meet a local larrikin known as Captain Starlight, or settle in beside a true outback postie who delivers mail on one of Australia’s longest runs.

So what are you waiting for? Pack your Akubra and get planning with our four-day guide to visiting Longreach with the family.

The biggest thrill is checking into a new place, and we have an extra special one to suggest right here in Longreach - Saltbush Retreat. Not only is it the most photogenic, but it’s the perfect balance of rustic meets nouveau. There’ll be time for a soak in the outdoor clawfoot bath and if you hang around for sunset, indulge in complimentary moreish canapés.

The Homestead Stables or Slab Huts come with complimentary use of the bath, or if you like a bit more room to spread out consider the Outback Cabins with their well-appointed kitchen and choice of one or two bedrooms. Or, go the whole hog and book the lodge.

If you’ve brought your own tiny home with you, Longreach Tourist Park has spacious powered and unpowered sites on offer and some have private ensuites too. There are Brolgas that dance in the red dirt behind the restaurant, and a well-stocked shop for anything you may have forgotten to pack.

The best bit of both though is they are an easy walk across the road to the QANTAS Founders Museum and the Australian Stockman’s Hall of Fame.

Start with a story that will uplift your spirit as high as QANTAS aeroplanes soar. You’ll learn of the pioneers whose dream became a reality to launch Australia’s first airline. Allow plenty of time to wander around interpretive exhibits, revel in replica aircraft and see the artefacts that tell the story of our country’s favourite brand. Kids will love the chance to test their skills as pilots in the simulator and challenge their detective skills by following the clues to objects in clever disguise that double as passive learning.

Take a tour with a difference on the 747 Wing Walk to get an actual birdseye view, or park yourself in the cockpit to marvel at just how many instruments a pilot has to consider. Kids will need to be 12 or above to do this one, and anyone under 18 must be accompanied by an adult.

Enjoy an early dinner close by at Harry’s Restaurant at the Longreach Motor Inn, named after local legend Harry Redford, also known as Captain Starlight. But more about this guy later.

And while you might think you’re all air-lined out, after dinner return to the Qantas Founders Museum for their new Luminescent Longreach Show. It’s a short 20 minute spectacular of light, sound and expert storytelling using a massive 747 as a canvas that you just have to see to believe. The kids will love the short punchy format and with action aplenty, there’s not a chance they won’t be enthralled. Check timings as they run the show to time after the sun sets to ensure you get the best viewing experience possible.

Start your day early with a breakfast burger, pie or pastry and a decent coffee at Merino Bakery. Be sure to add a few peach blossoms to the snack box for later which is a delicious lamington like sponge cake dipped in raspberry jelly, rolled in coconut and stuck in the middle with cream. You’ll be back for more tomorrow.

Spend the day at the Australian Stockman’s Hall of Fame where you’ll learn about the Iningai people; the traditional owners of this land with history dating back 40,000 years. There’s five galleries to explore that share the histories of the Royal Flying Doctors, Properties, Pioneers and so much more.

Kids will love the 'Children’s Discovery Draws’ which invites them to actually touch the exhibits; and don’t forget to take a selfie with the Ringer, the famous bronze statue of a Stockman standing proud. Then take your seat ladies and gentlemen, boys and girls, for the rousing Outback Stockman’s Show. You’ll be thrilled by genuine ringers and their incredible animals and livestock as they roll out a rollicking one-of-a-kind show as a rare glimpse into working life on the land. Check showtimes before booking as availabilities may have changed due to COVID.

You can’t visit the outback without a full station tour, so follow in the dainty footsteps of royalty. Yes, Queen Elizabeth and Prince Phillip have stepped their well-to-do feet here at Camden Park Station. You’ll be guided by Outback Dan, a true-blue Aussie icon of the Outback, and learn about the Walker family’s 18,000 acres where sheep and cattle roam. Be mesmerised by expert storytelling while enjoying sunset nibbles before basking under the giant outback sky studded with a million stars. And if you ask Dan nicely, he might even let you have a sneaky waltz in the outback’s oldest ballroom.

Our favourite tour leaves twice a week. It’s the Outback Mail Run departing Longreach at 5:30AM and taking in 500 km to deliver - you guessed it, the mail. You’ll meet outback folk who rely on not just the service but the witty conversation from the postie, and you’ll share smoko, lunch and engage in station talk while you help deliver good old-fashioned communication. The tour concludes mid/late afternoon and includes food, drink and lots of chatting. Bookings are essential and seats limited, so enquire well ahead of your arrival.

If the long day hasn’t worn you out just yet, relax in refined outback style on the award-winning Drover’s Sunset Cruise. Watch as the colours of the outback light up the sky as you glide down the mighty Thomson River listening to the Captain tell his captivating tales about the lifeblood river. Spot wildlife on the banks as the sunset fades into night before stopping into Smithy’s Outback Dinner & Show where you’ll feast on a camp oven-themed dinner while performers belt out some tunes and share even more stories. Longreach is full of them!

As an option, you could also choose to hop aboard The Starlight Cruise Experience, the only paddle wheeler west of the Great Divide. After your leisurely cruise along the Thompson, be delighted with a camp-fire dinner and beautiful local rendition of bush poetry before settling in for the Starlights Spectacular Sound and Light Show. This is where you will learn the story of Captain Starlight, known as a notorious cattle thief, but with a side of larrikin that always left the law guessing. Finish the night with damper and billy tea under the same stars Captain Starlight used to camp out under at Starlight’s Lookout (which is a 40 minute drive from town). It was here that he is said to spot the cattle being mustered and if you are to believe local legend, cheekily pinch them right out from underneath their owners’ noses.

Enjoy a delicious breakfast at Casey’s Cafe before wandering around the main streets for some shopping where you could pick yourself up a souvenir Akubra (the Stockman is the ridgy-didge style worn by the ringers), and be sure to stop in at Kinnon & Co’s the Station Store which stocks an impressive array of outback memorabilia.

Did someone say Waltzing Matilda?

Continue your journey to Winton, a lazy 1.45 hr drive on the Matilda Highway (yes, they love the name Matilda round here). A stop in at the famous Gregory Hotel will take you back to the 1800s when Australia’s most downloaded song, penned by one Banjo Patterson, was first tinkled out on the piano. Worth a wander also is the Waltzing Matilda Centre, the only museum in the world dedicated to a song. But there’s plenty of other memorabilia to discover here also, including a glimpse into the geological events that etched Winton into the prehistoric history books as the dinosaur capital of Australia.

A visit to the Australian Age of Dinosaurs will inspire budding palaeontologists. Wander the mesa, or take a tour down to its core where the dinosaur canyon will have you in raptures discovering all the species that once roamed these ancient lands. A tour of the facility where they like to dust off dem bones is a worthy inclusion also, to appreciate why science folk seriously dig Winton as one of the world’s most fascinating fossil-filled backyards.

You’ll have worked up an appetite, so enjoy a street side dinner at The Tattersall Hotel. It’s a lesson in history itself as Winton’s oldest standing establishment, and as they serve the regions famed steaks on repeat, you’ll get literal taste of Winton’s rep as prime cattle country too.