With a week in Darwin, you'll have plenty of opportunities to learn about the culture and history of living in the Top End, as well as take day trips to nearby islands and natural sites. On a day excursion by ferry or air, cool yourself under a waterfall in Litchfield National Park, immerse yourself in the colorful and diverse Aboriginal art, and see everything the Tiwi Islands have to offer. Spend your evenings savoring the city's culinary delights while admiring Darwin's famous sunsets. 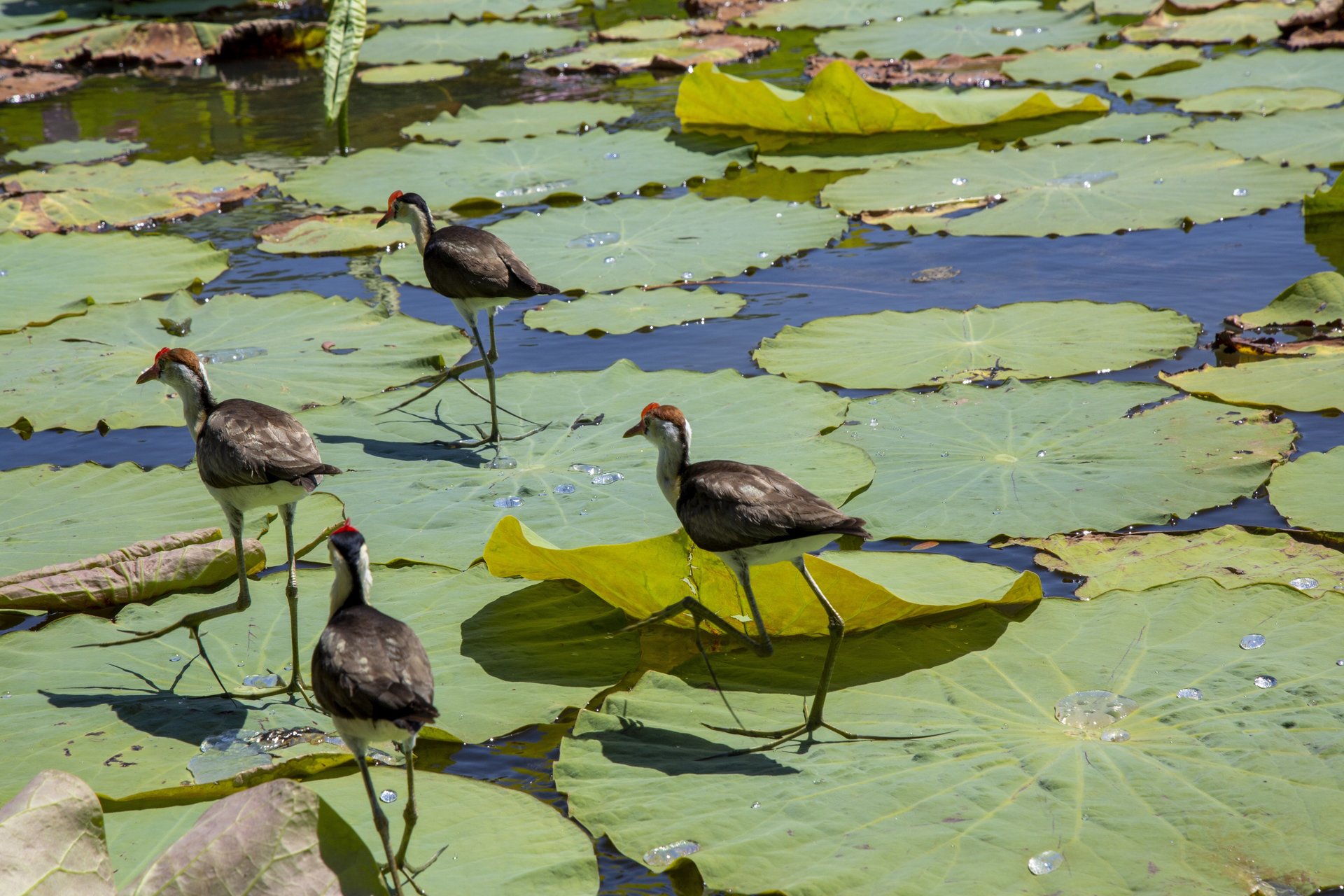 Begin your day with a cup of coffee and breakfast at one of the city's many prominent cafés. Take some time to peruse the local shops and boutiques for some one-of-a-kind souvenirs. Join Darwin Gourmet Tours for a guided trip to familiarize yourself with the city and sample the flavors of the Territory.

Immerse yourself in art

You'll spend today immersed in the local Aboriginal art scene. The cities of Darwin and Parap are excellent destinations to see and buy Aboriginal art from all across the Northern Territory. The Northern Territory Museum and Art Gallery is also an excellent site to learn more about Aboriginal art and view local crocodile star Sweetheart. The museum has a taxidermied saltwater crocodile that is 5 meters long and weighs 780 kilograms. The museum also has a Cyclone Tracy exhibition, which is well worth seeing to get a sense of the magnitude of the disaster that hit the city on December 24, 1974.

Museum and Art Gallery of the Northern Territory

Absorb the beauty of the botanic gardens

Take a stroll through the shaded George Brown Darwin Botanic Gardens, or better yet, join a Segway tour to see Northern Australia's amazing flora from a unique perspective. Before resting with lunch at the onsite café, take a stroll through monsoon woods, coastal dunes, mangroves, and open woodlands.

Dinner with a view at the wharf

Head over to Stokes Hill Wharf, which is part of the Darwin Waterfront Precinct, this afternoon. Locals frequent this place for fishing, and it is dotted with popular restaurants, cafés, and retail businesses. It's also a good chance to see the massive cruise ships docked at the terminal. Finish the day with some fresh fish and chips and a nice drink while watching the sunset over the Top End. You might even see some local dolphins in the water below if you're lucky.

Take a day excursion from Darwin to Litchfield National Park, which is about 1.5 hours away. You can rent a car and explore Litchfield National Park on your own, or there are many excursions available that include Aboriginal cultural experiences if you prefer not to drive. With its cascading waterfalls, waterholes, and bushwalks, it's easy to see why locals consider this one of their favorite spots. Plunge into the crystal blue waterholes beneath the beautiful spring-fed waterfalls of Florence and Wangi Falls for a refreshing dip. Alternatively, at Buley Rockhole, unwind in the soothing three-tiered cascade waters sheltered by rainforest.

If you're feeling more daring, lace up your boots and go on one of Litchfield's many bushwalks. There's a picturesque 3.5-kilometer walk that runs alongside beautiful Walker Creek, or the dramatic 39-kilometer Tabletop trail that leads to hidden waterfalls. Before you may begin your trek on the Tabletop route, you must be self-sufficient and register with Parks.

Settle in for a movie under the stars

Return to Darwin this afternoon and unwind with a movie at the Darwin Waterfront's Deckchair Cinema. During the dry season (April–November), the open air cinema shows Australian, popular, family, foreign, and classic films. Relax under the stars while enjoying their onsite bar and food vendors to make the most of the event.

Take some time to study about Darwin's wartime achievements during WWI and WWII while you're there. The Military Museum's Defence of Darwin Experience is an excellent spot to get your combat history fix. The exhibition and multimedia presentations will teach you about Darwin's bombing and its participation in WWII. Visit the museum to see artillery pieces, vehicles, uniforms, and weaponry, or visit Stokes Hill Wharf and the RFDS Tourist Facility to see the Bombing of Darwin Harbour exhibit. The virtual reality film and life-size holograms assist in bringing the dramatic events to life.

Bicentennial Park, poised on the cliffs of Darwin Harbour, is located on the Esplanade. Visit the Cenotaph, Darwin's first war memorial, which honors Australians who died in WWI and the Aboriginal men and women whose bush skills helped the Army preserve the rugged northern coastline during WWII. Take a stroll along The Esplanade to Parliament House, which is shaded by tropical plants. Mitchell Street is nearby, where you can find a variety of lunch alternatives.

Continue to the Darwin Waterfront Precinct's WWII oil storage tunnels. The tunnels were built after the first Japanese air attack bombed the oil storage tanks, and two of them are exposed to the public today. Take a tour of the tunnels with an expert guide and understand how they were built under extreme conditions to protect the city's diesel and furnace oil from aircraft attack.

Return to Stokes Hill Wharf as the sun sets to take a sunset cruise on a classic pearling lugger or catamaran for a sunset cocktail or meal. Book a 45-minute excursion with Darwin Airboat Tours or take it up a notch with an exhilarating jet ski tour across Darwin Harbour if you're searching for a thrill on the water.

Hop over to the Tiwi Islands

The Tiwi Islands are known for its traditional Aboriginal arts and crafts, as well as their love of Australian Rules Football (AFL) and fishing. The Tiwi Islands can be reached from Darwin as part of an organized Aboriginal tour or fishing excursion. Take a 15-minute light aircraft flight from Darwin or take a ferry ride over the water.

On the islands, art is a part of daily life. Stop by one of the art centers to watch artists in action and to buy local art and craft. The Tiwi Museum has traditional art and renditions of Tiwi creation stories on display, and the Early Mission Precinct has a unique Tiwi-style Catholic Church.

Return to Darwin this afternoon and make a reservation at Hanuman Restaurant, one of the city's gastronomic highlights. Hanuman mixes Asian-style design with a unique menu of Thai, Indian, and Nonya food to capture the flavors of cosmopolitan Darwin. The trumpet mushrooms and Hanuman oysters from Chef Jimmy Shu are highly recommended.

Breakfast with a view

Make your way to Darwin Waterfront for breakfast with a view this morning. There is something for everyone, from high-end restaurants to more casual cafés and pubs. Pack your bathing suit so you may swim in the wave pool or the Recreation Lagoon. Man-made waves of up to 1.7 meters are generated at regular intervals, allowing you to paddle, swim, bodysurf, or play in the lagoons. Swimming is permitted in both areas, which are free of stingers.

Go face-to-face with a croc

After lunch, head to Crocosaurus Cove on Mitchell Street in Darwin's central business district. At the aquarium, you'll be able to get up up and personal with the world's largest reptile, the saltwater crocodile, as well as learn about a range of fish and reptile species. A crocodile and fish feeding display takes place twice daily and is not to be missed. Climb into the Cage of Death for a face-to-face encounter with one of the world's largest saltwater crocodiles in captivity if you're feeling particularly daring. It's the ultimate burst of adrenaline!

Sunset and shopping at Mindil Market

Between May and October, Darwin's famed Mindil Beach Sunset Markets are hosted every Thursday and Sunday evening. The market's arts, crafts, and food stalls reflect the region's incredible multicultural mix, so bring a spare bag and an appetite. Enjoy free entertainment from magicians and buskers, then choose from an extensive menu and dine barefoot on the beach while taking in a spectacular Darwin sunset. If the Mindil Beach Sunset Markets aren't happening today, go to Cullen Bay Marina to watch the sunset while eating takeout fish & chips.

Berry Springs Nature Park (normally open from May to November) is a great place to go if you're looking for some R&R today. It's only 47 kilometers south of Darwin. During the war, it served as a relaxation camp for military soldiers, and it is now a popular site for a BBQ and a plunge in the beautiful freshwater pools. You'll be able to see native fish and other water life if you bring your goggles. Check out one of the bushwalking trails this afternoon, or visit the interpretive center to learn more about Berry Springs Nature Park's wartime past.

Discover the local wildlife at the nearby Territory Wildlife Park where you can take in a birds of prey show or hand-feed the whip rays and barramundi in the Oolloo Sandbar. Wander through treetop aviaries, around a natural lagoon and through the aquarium to see animals, including Graeme the saltwater crocodile.

Relaxing dinner with the locals

In the afternoon, make your journey back to Darwin. Dinner at the Darwin Trailer Boat Club or the Darwin Ski Club is a great way to end a day in the Top End.

It should be on everyone's bucket list to cruise through marshes abounding with wildlife in the Top End. Today, take a one-hour ride on Corroboree Billabong, about 1.5 hours from Darwin, to immerse yourself in the nature. It's an excellent opportunity to photograph and learn more about the local fauna. Wetland birds such as jabirus, brolgas, magpie geese, and other species, as well as crocodiles, can be seen. The billabong is reported to be home to the world's largest concentration of saltwater crocodiles. Make a point of stopping by Window on the Wetlands, where interactive displays describe the history and ecology of the northern coastal wetlands, as well as seasonal changes and plentiful wildlife.

Take in the wildlife at Fogg Dam

Stop by Fogg Dam Conservation Reserve on your way back to Darwin. It's one of the few wetland systems that can be visited all year long. Boardwalks lead you through various landscapes and observation platforms where you may see the great number of resident wading birds.

A send-off with style

Finish your week in Darwin by saying your goodbyes in style at one of the many bars and pubs along Mitchell Street, the city's major entertainment area. Traditional pubs with beer gardens, popular live music venues, terrace bars with street-side eating, casual backpacker hangouts, sophisticated cocktail bars, and nightclubs are just a few of the options.