Best places to visit in New York for the first time

New York is so big and so diverse a place that you could live here four lifetimes and not experience all the amazing things the city has to offer. 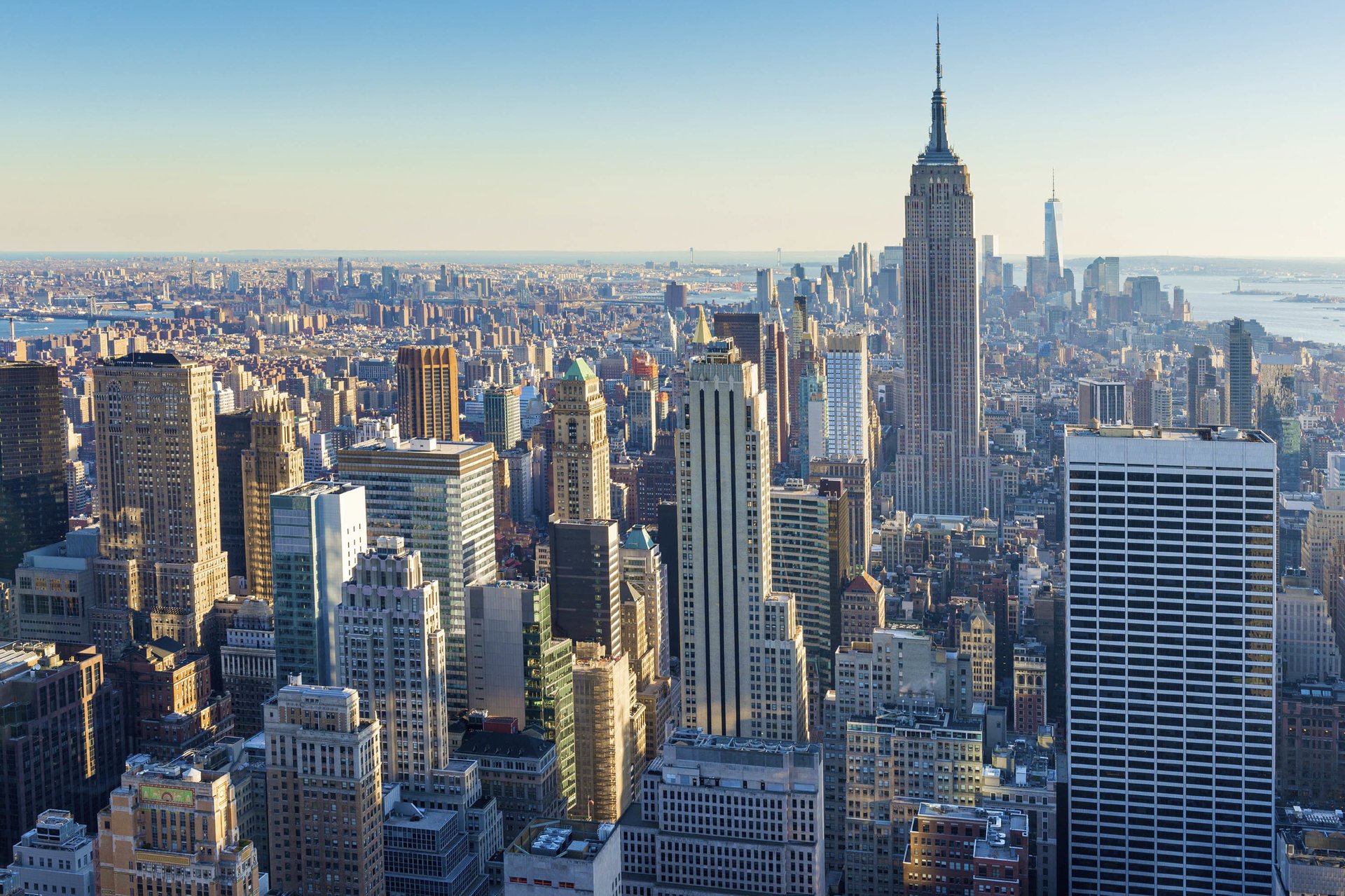 When the Brooklyn Bridge was constructed in 1883—extending 1,595 feet across the East River, connecting lower Manhattan to Brooklyn Heights—it was the longest suspension bridge in the world. Now, it’s a historic staple of the New York City skyline, transporting commuter car traffic underneath and touristic foot traffic above. Standing before arches and rectangles with city skyscrapers rising in the distance, will at once inspire a sense of grandiosity and slightness.

The Manhattan Bridge is a suspension bridge that crosses the East River in New York City, connecting Lower Manhattan at Canal Street with Downtown Brooklyn at the Flatbush Avenue Extension. The main span is 1,480 ft long, with the suspension cables being 3,224 ft long. The bridge's total length is 6,855 ft.

In 2019 4.2 million tourists visited Liberty Island, the 14-acre swath of land one mile south of lower Manhattan where the Statue of Liberty rests. While there is no fee to visit Liberty Island, you do have to pay for a round-trip ferry ride via Statue Cruises. The ferry also stops on Ellis Island, part of the national park, which houses the Ellis Island National Museum of Immigration, where visitors can search ship manifests for the records of their relatives. If you plan to visit the Statue’s pedestal or crown, plan ahead: There are a limited number of tickets available each day and they sell out weeks, if not months, in advance. Also plan on spending the day: It can six hours to properly visit the statue and Ellis Island.

Coney Island has a reputation as a circus-worthy tourist trap, which is exactly what it is. But you may be surprised by the old-timey charms of this beachfront American town. You’ll definitely be impressed by the food and drinks—Totonno's Pizza, Gargiulo's, and Coney Island Brewery in particular. Locals and tourists hang out on the beach, eat ice cream cones on the promenade, and stand in line for the famed Cyclone roller coaster. The beach and boardwalk along with spots like Nathan’s are open year-round. The amusement park itself is seasonal.

Step off the crowded sidewalks of 59th Street into Central Park and you’ll hardly realize what lies before you: 693 acres of man-made gardens, meadows, forests, and rolling hillsides. If you ambled down every one of Central Park’s pathways, you would walk 58 miles. Along the way, you pass fountains, monuments, sculptures, bridges, and arches, plus 21 playgrounds, a winter ice-skating rink, a zoo, and even a castle. But you’d hardly notice the four major crosstown thoroughfares, which cleverly disappear into foliage-covered tunnels.

The Whitney got a major upgrade when it relocated from the Upper East Side to its vastly-expanded Meatpacking headquarters in 2015. It houses 50,000 square feet of indoor galleries with works by Jean Michel Basquiat, Richard Avedon, and Alexander Calder, four outdoor exhibition spaces and terraces, and a ground-floor restaurant and top-floor bar, both by Danny Meyer, one of the town’s best-known restaurateurs. The floors are connected by two artist-designed elevators (albeit slow-moving, crowded ones). If mobility isn’t an issue, take the stairs instead, which offer uninterrupted views of the Hudson river. The upper floors and sculpture terraces are also connected by a series of exterior staircases, with great views of the downtown skyline, and a rare opportunity to experience art en plein aire.

When London shopping hotspot Dover Street Market debuted its New York outpost in December 2013, throngs of accessorized fashionistas camped out for days outside its Lexington Avenue entrance. Dover Street is more than just a luxury department store; it’s a fashion-meets-art exhibition space. Featured designers configure their own display areas, allowing the shopper to interact with the clothes in a holistic manner that takes you inside the designer’s world—as opposed to just picking through dresses hanging on a metal rack. Also don’t miss the ground-floor café, Rose Bakery.

The High Line is a perfect example of what New York City does best: cleverly rehabs old spaces into exactly what you want them to be. When a 1.45-mile-long abandoned freight rail on Manhattan’s West End was transformed into an elevated, mixed-use public park in 2009, New Yorkers came running. Towering 30 feet above buzzing 11th Avenue, the High Line is a masterful feat of landscape architecture that melds walkways, benches, and chaise lounges with grass, perennials, trees, and bushes in perfect unkempt-kempt harmony.

With its towering stacks, filled with more than 2.5 million titles, this 93-year-old bookstore is less neighborhood haunt and more globally recognized institution. You could call the Strand's employees tour guides, considering their deft ability to find the exact title you're looking for and recommend a book you may not have otherwise plucked from the shelves. The store will make you question why you don’t read more; and chances are you won’t leave empty-handed.

The New York Botanical Garden has carefully manicured flower gardens, lush fields, winding hikes, and impeccable greenhouses. There are spaces that feel deeply intimate, as if you're truly separated from the world, and there are vast expanses where it's hard to believe you're still in the Bronx. In winter, the greenhouses host an annual train show recreating all of New York City in miniature; the warmer months bring every floral delight imaginable, from cherry trees to peonies. Plan to spend at least half a day here and pack a picnic.

Grand Central Terminal is more than just one of the busiest train stations in the world—it's a window into old New York and into a time when train travel was the ultimate luxury for the wealthy and a necessity for the working man. If you aren't commuting in or out of the city, avoid coming during rush hour, and take your time admiring the landmark architecture and checking out the top-notch dining and shopping.

Every American should visit the 9/11 Memorial and Museum at least once. As you enter the museum, you descend from the street to bedrock level—the foundation of the former Twin Towers—and are placed in a meditative mindset, forced to recall where you were on that fateful day. The museum itself is a masterful balance: It's grand in scale, contemplative in its construction, and personal in its execution. It pays homage to the enormity of the loss, both physical and spiritual.

The Morgan is like a multi-hyphenate millennial—only instead of actress/model/influencer/whatever, it’s museum/library/landmark/historic site/music venue. Inside the multimillionaire’s personal library, expanded into a must-see museum and cultural space, you'll find rare artifacts, paintings, and books, some dating back to 4000 B.C. that are worth more than your house. In particular, the museum is home to one of 23 copies of the original Declaration of Independence; Mozart's handwritten score of the Haffner Symphony; the collected works of African American poet Phillis Wheatley; the only extant manuscript of Milton's Paradise Lost; and Charles Dickens’s manuscript of A Christmas Carol. Swoon.